ABOUT OUR SHOOTING RANGE

Our shooting range is located in the building constructed in 1875 as a part of the "Tryokhgorny" brewery. For more then 130 years this building had been used as a malt-house. In 2006 brewery was closed and building was proclaimed as the monument of industrial architecture. Brewery equipment was removed but archs, walls, chandeliers were remained untouched as it were in 19th century.

This building consists of a number of long space halls with high ceiling. Most of them have not been repaired yet. But there is a big reconstructed "entertainment core" where you can get a lot of fun. Here we've got: 2 archery shooting galleries, airgun shooting gallery and knife throwing hall. Also we have a banquet hall, hall with ping-pong and even a mini skating rink. So we're sure you'll have a great time in our shooting range!

The best place to practice in archery, air gun shooting and knife throwing! 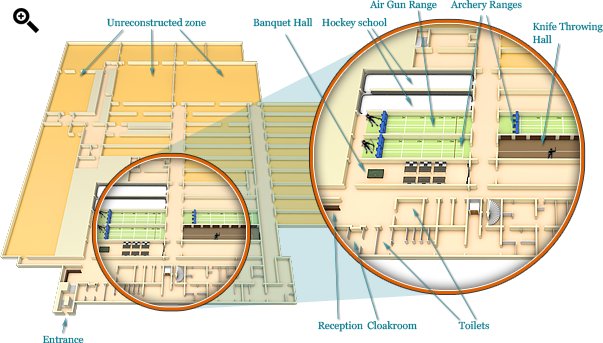 You will get a track, personal trainer and any of our bow or crossbow. Don't worry if you've got no experience - we'll teach you!

Shoot from famous pistols and rifles

Try Beretta, Colt, Makarov or even sniper rifle in our airsoft range. Differnet types of aims, personal trainer and many more.

Learn how to throw knifes and axes

Check your throwing skills. Take a knife or even an axe and put it into the aim! You will be coached by the knife throwing World Champion.

We have AK-47, Dragunov and Mosin sniper rifles, legendary PPsh-41 and most famous pistols Glock 17, CZ-75, Makarov and Yaryugin.